Agnes was born as generation 2, daughter of Marita (Bornemo) Myhr and Evert Myhr. She's got blond hair and brown eyes with a  light skin tone. Her aspiration is Family/Fortune and her LTW is to reach Golden Anniversary - achieved at 55.  Now she wants 6 grandchildren. She turns on from brown hair and swimwear, and turns off from stink.

Her sign is Capricorn and personality points are as follows: 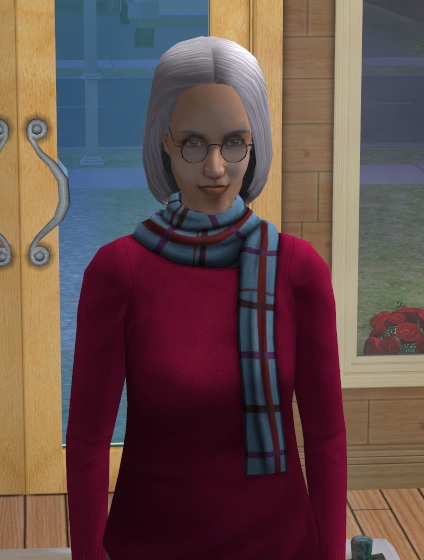 Only this is Mattsmyra. And it’s a girl. She looks like her mother and brother and gets Popular name no 16 – Agnes. Her birthday is November 9th ’40. Agnes grows up to toddler in the middle of chaos. Rolf just threw a failed party with all teenagers he ever met, and tried to figure out whether he likes boys or girls for his LTW of 50 dream dates. No result from those trials.
Evert had the shop open, but set the stove on fire, again, so he lost customer loyalty, partly because of being frantic instead of minding the teller. He finally succeeded in getting a gold badge for Register, when Marita closed the shop for the day, not to lose a level for the business. Busy, busy parents. Agnes is trying to get some attention. Rolf might have found his preference – for old Romance sims, or maybe only Magnus Berg in particular. He’s the hottest guy in all Mattsmyra.

Maja is a townie, and was moved in to live with Daniel Johansson as a first generation adult. Later she married Leif Hartwig and moved to Färila. She's got blond hair and dark blue eyes with a very light skin tone.
Her aspiration is Fortune/Knowledge and her LTW is to become a Chief of Staff - Acheived at 65. Her turn-ons are blondes and glasses, turn off is hats.

Her sign is Gemini and personality points are as follows: On the 17th of October ’40, after 1½ years fighting, Max Johansson comes back to the family, adopted by his uncle Daniel and aunt Sofie, who are now his legal parents and guardians.
He needs to start over in elementary school, to catch up what he lost before, but hopefully he’ll be better off now. “You are such a bunch of losers!” the Social Lady says, returning already the same afternoon.
“You didn’t even give us a chance! He had grade 1 when he arrived this morning, and he has grade 1 this afternoon, what am I supposed to do?!” Daniel replies. “We didn’t even have the chance to do homework with him for one day, and you take him back!”
(Isn’t usually an adopted child automatically a grade 3 when they arrive from social services?!) And there he goes again.
“Fun to ride in this blue van, can we go to my other relatives now?” Sofie didn’t even have the chance to meet her adoptive son before he was gone again. Feels like this is some kind of a bug… Daniel feels like a failure after the disaster with the adoption of Max. He also feels very lonely, him and Sofie are working on their respective careers and are not talking to each other a lot anymore.
Daniel invites his old friend Maja, and finds that there is a strong attraction between them. Maja is attentive to Daniel’s needs in a totally different way than Sofie. And in the heat of the hottub, Daniel and Maja are falling in love with each other. On a crazy impulse Daniel asks Maja to move in, and she accepts! Livia is stunned, and can only watch the scene with a dropped jaw.
Maja brings 18.000 § and, most probably, a lot of complications! They spend some time together in bed… …while Livia is trying to burn the house down. In the evening she invites Ricky over. He brings a friend, who turns out to be no one less than her other lover Tobias Mattsson. This can be interesting. She does want to woohoo, who should she pick?! She chose Tobias, this time. That would have been my choice too. Livia gets promoted to Starter, and invites Robin Logren for some woohoo. And thereby the weekend is over.