David was born as generation 3, son of  Allegra (Gast) Lind and Georg Lind. He's got brown hair and green eyes with a light skin tone.
His aspiration is Popularity/Fortune and his LTW is to become General - acheived at 50. Now he wants to become a Rock God - acheived at 57. Now he wants 20 pet best friends  His turn-ons are black hair and perfume, turn off is neatfreaks.

His sign is Libra and personality points are as follows: 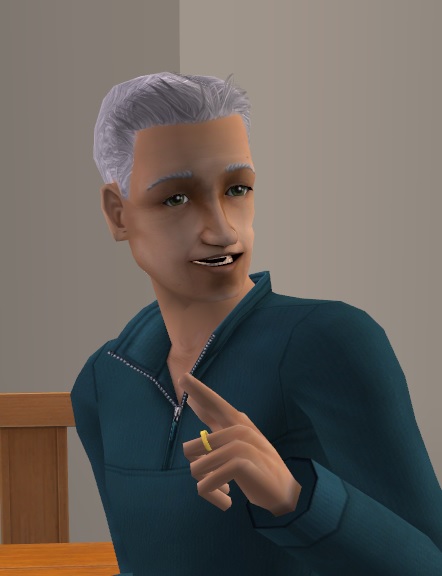 Last time at Letsbo, Melissa Lind was reaching her dream of becoming a Hall of Famer and gained permaplat status in the process. Annika grew up well to child and her mother Allegra became very pregnant. The family threw a garden party and failed in getting Annika accepted in Private School, despite Georg's ten cooking points hamburgers. Allegra wakes up at 5AM, from labour pains. The first ‘50s baby is coming! Now when she’s not pregnant anymore, Allegra has the time and energy to teach Annika how to study. “Pappa! Pappa! Guess what?! I got an A+ report card today! And Farmor is arranging a birthday party for David! He will become a toddler, isn’t that great, then we can play together!”

“You sure can say a lot of words in a very short time! When are the guests coming?” David grows up to toddler, one confetti snowing night. Annika brought Noel Bardh with her home from school. This could be a Romeo and Juliet drama, they are from rivalery families, since Annika’s father Georg and Noel’s mother Thea had a romantic past, which ended with hatred, finally ending up in the Letsbo/Öljung vendetta.

Apart from that a match between Noel and Annika would be nice, he (or his brother) is heir to Öljung, and Annika is not heir. They are also only one year apart in age. The headmaster has arrived! Melissa greets him. Aaand… … No. Not this time either. I don’t know why they cannot succeed, they have a better house and more charisma than many other families that succeed. And the round ends with Georg getting promoted to Police Chief at the age of 39. Good job! Maybe he’s got a chance to reach Captain Hero status before he’s an elder.